Home > Word letter > He had a Choice .. He Choose the Cross

He had a Choice .. He Choose the Cross 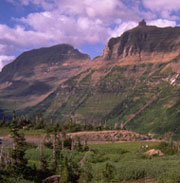 There are many different facts stated in the Bible that should cause us to stop and look at the Cross with Awesome Wonder... And yet, how often do we stop to contemplate those facts?

Take today?s topic for example! What does the title mean to you? What emotions does it conjure up? For me, that simple yet profound statement of Truth causes me to experience a tidal wave of emotions... Awe, humbleness, gratefulness, thankfulness, wonder, amazement, astonishment and ranging all the way to mortified, appalled, embarrassed, ashamed, scared... You name the emotion, and I?ve probably experienced it.

But Why? Jesus Christ had a choice to die for me. He chose to do it. He, the Son of God, God in the Flesh, the Incarnation of the Almighty Himself, CHOSE to allow His creation to kill the body of the Creator! ! ! Why? To save me! ! To save you! In order to have a personal relationship with Jesus Christ, a True Relationship, I had to realize that one basic Truth.

Let?s break it down:

Who is Jesus Christ?

Hebrews 1:2 "... in His Son, whom He appointed heir of all things, through whom also He made the world."

John 14:7 "If you had known Me, you would have known My Father also; from now on you know Him, and have seen Him."

Therefore, the Bible tells us that Jesus is God in the Flesh... Jesus is One with God.

So Who is God?

1 Corinthians 8:6a "yet for us there is but one God, the Father, from whom are all things, and we exist for Him;"

The Bible tells us that God is the Creator.

Genesis 1:1 "In the beginning God created the heavens and the earth."

Genesis 1:27 "And God created man in His own image, in the image of God He created him; male and female He created them."

Genesis 2:7 "Then the Lord God formed man of dust from the ground, and breathed into his nostrils the breath of life; and man became a living being."

Look at these verses. Read them, meditate on them.

I?m sure we?ve all read them before, but read them now, with this Truth in the forefront of your mind....

Matthew 27:50 "And Jesus cried out again with a loud voice, and yielded up His spirit."

Luke 23:46 "And Jesus, crying out with a loud voice, said, "Father, into Thy hands I commit My spirit." And having said this, He breathed His last."

John 19:30 "When Jesus therefore had received the sour wine, He said, "It is finished!" And He bowed His head, and gave up His spirit." And if that isn?t enough, He told us what He was going to do. He told us of His choice:

John 10:17 "For this reason the Father loves Me, because I lay down My life that I may take it again."

And He did it for one reason and one reason only. Salvation of His chosen people. Christ was following His Own Perfect Nature in the completion of the plan of salvation. After all, He chose to love us. He chose to die for us. He chose to save us. His Choice. He made all the sacrifices, He took all the pain, punishment and condemnation. He chose to do all of this.

What do you suppose He was thinking on the Cross that day?

What do you suppose His prayer was?

I believe He was thinking of me. I believe He said to the Almighty Father, "Father, I do this for Theresa, she is mine." I believe He said the same about you, Bob, Frank, Susan, Carol, Megan, Bailey, Joshua, Amanda, Mike, Joe, John, Beth, Francis, Connie, Harvey... Every one of His chosen... He knew, even then, who we were.

He knew we needed this path of salvation, and He readily stepped up, suffered for us, and guaranteed that we would not have to do it ourselves. He is the Way, the Truth, and the Life.

How can we NOT have a personal relationship with Him?

He loved us this much, and He isn?t asking for much...

Not that we return the suffering, only that we love Him. Only that we make Him our Lord. How can we not?

May His Truth be your Truth,
Theresa Leavitt July 9, 1999
All Scripture is from the NASB